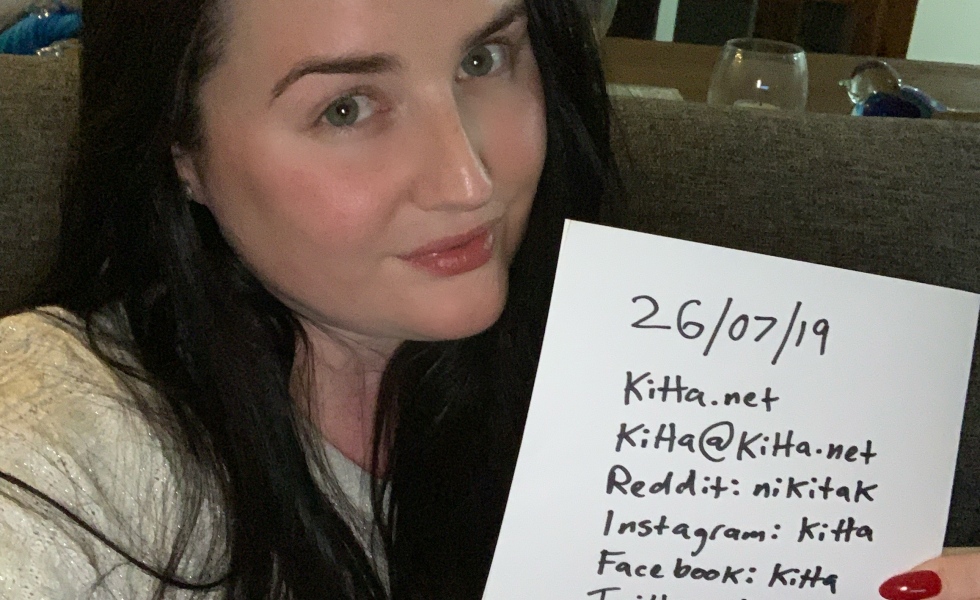 Let me dust off the old blog (seven years after my last post) to bring you a hilarious tale of how I was accused of using my own photos to catfish on Reddit.

I have had the unfortunate pleasure of catfishers using my photos and identity to catch victims hundreds of times over the seventeen years my website has been active. Normally, someone contacts me via my email address or social media accounts to alert me about a faker or a catfisher. I then report the catfisher using my photos and/or identity on whatever website they used me on. Eww. That sounds dirty. This used to happen a few times a week when my blog was active, but these days I have someone contacting me maybe once a month to report someone using my photos or identity. You know how it is estimated the average person spends five years waiting in lines and queues in their lifetime, I wonder how long I will spend replying, reporting, threatening legal action, etc catfishers who use my photos?

Recently I was returning to Perth from a holiday in Bali. As I was about to board the plane I jumped on the wifi to soak up some sweet delicious data before boarding a flying metal machine and staring at the heat cream adverts in Balinese on the overhead compartments for hours, wondering exactly what the cream is meant to heat and why the girl in the advert was smiling in a sly manner. My money is on boobs. I checked all the usual suspects; Instacrack, Facepalmbook, YouTubbin and of course my beloved, Reddit. I noticed a direct message, which was new, no one ever contacts me on Reddit. I rarely post something of substance. I mainly lurk, upvote dog pics or gaming-related posts and make sarcastic comments. I was surprised to see some random wanting to message me. Maybe they want to send me a photo of their dog because said dog is so cute? Maybe they knew the worlds best cookie recipe to eat while gaming?

END_OF_DOCUMENT_TOKEN_TO_BE_REPLACED

It normally doesn’t snow down under in sunny Perth, Western Australia – unless you count fake snow made with diapers and water – and we tend to spend our holidays trying to escape the heat while dreaming of a white Christmas. To rectify this predicament, I have installed the Snow Storm WordPress plugin to simulate cyber snow on my website. Please try to refrain from licking the screen.

I was lusting after the buttery popcorn infiltrating my nostrils as I waited in line to have my book signed by David Sedaris. My eyes drifted towards the sign that read ‘BAR UPSTAIRS’ and ‘NO CAMERAS OR PHOTOS’ in threatening capitals. Devar asked me what I was going to say as he ignored the threatening sign and took a photo of the line. I didn’t know. Although he is one of my favourite authors, I assumed he would ask the typical questions authors ask their adoring fans – “know any good jokes?” or “what do you do?” – and I wanted to get it over and done with to reduce the risk of saying something foolish. Like the lady in front of me who was contemplating boasting about how she named her imaginary boyfriend after him. David started signing my book, he asked me how much money I earn and in return I asked what he thought of Australia. “It is expensive” he said, “and hot” I added, just in case he was needing another adjective to explain Australia. It had been quite humid that day and Perthians love to complain about the weather. My interaction with him was short and sweet, he wrote “I’m so happy you can walk” in one of my books and drew a dog in another book.

The show consisted of David reading essays from The New Yorker, a piece he wrote for British paper entitled ‘If I Could Change The World’, diary entries and questions from the audience. The most amusing part of the show was a story about his female friend, who preferred to remain nameless, she also preferred to catch her poop in her hand when using the toilet instead of letting it make a horrid plop sound in the toilet bowl. That would be so embarrassing.

During the show Mark Trammell replied to my tweet, “Get him on Twitter!” he exclaimed. After two glasses of wine I decided to line up again after the show to ask David why he doesn’t join in on the Twitter fun and tweet about eating sandwiches, crazy dreams he had last night, how losing socks really sucks and other random observations or thoughts in 140 characters or less. I didn’t ask it in that way. It escaped my mouth in a more “me again, so that Twitter thing, a guy I follow who works there wants to know why you don’t do it?” manner of speaking. He hungrily consumed a plate of chorizo and salad had been placed in front of him while I asked my twittastic question. He made the ‘let me just finish chewing this’ universal motion and then tried to explain the Twitter predicament. Apparently someone had already created a David Sedaris account on Twitter, he then paid someone to switch the account over to him, but didn’t really know what it was or what to do with it once it was his. So there it sits, with over 4000+ followers and no actual tweets. I tried to convince him he should tweet (join the cool kids, drink the koolaid, follow the leader) but he didn’t seem convinced. I wanted to say “no one understands Twitter, David” but I didn’t want to scare him with inception like comments. I instead urged him to tweet and wrote down my username and the address of my account in case he wanted to see what it was all about and required guidance. In that moment I thought of myself as a sort of Mother Teresa of tweeting – I could guide him into over one million followers and we would DM about what type of background colour he should use. It would be awesome.

As he put another forkful of sausage into his mouth I came back to reality and thanked him for the performance as he waved on the next question. Later I pondered if he would screw up the piece of paper from the Aussie girl who totally thought he should tweet or figure out what Twitter was at least. It then occurred to me the kind of subjects I tweet about.

So if you’re ever at a David Sedaris show or book signing and he mentions this strange Australian girl who tweets too much about Skyrim or boobs and tried to force convince him that Twitter was the shit and he laughed about it later in his hotel room wasn’t convinced. Please don’t judge me. At least I’m not the girl who pooped into her hand and gently lowered it into the toilet bowl because she didn’t want it to make that socially unacceptable plop sound in the toilet bowl.

If I was her I would at least tweet about it.

Australia’s second largest DSL broadband provider, iiNet, has announced the return of the TopGeek competition. I entered the iiNet TopGeek competition last year and after several rigorous geeky challenges, where I invented an iPhone app and turned my friends into zombies, I leveled up and made it into the top ten before I took an arrow in the knee, resulting in game over. In the end there could only be one Top Geek, that honour went to Cassandra James, a talented comic book artist from Tasmania.

TopGeek 2.0 follows last year’s highly successful inaugural contest, and will once again see geeks of all types show off their geeky prowess in an attempt to take out the title of Australia’s next TopGeek. The winner will also score an all-expenses paid trip to attend one of four geeky events – including ComicCon, Consumer Electronic Show, South by Southwest or Penny Arcade Expo. Last year’s winner will head to San Diego in July for ComicCon 2012. She’ll report back to TopGeek HQ with all the comic news and make you wish you were there, and you could be, if you enter TopGeek!

I won’t be entering the TopGeek 2.0 competition this year, instead, I shall be judging it along with last years finalists, Andy Wells, Jason Cartwright, Jess Watson and Cassandra James.

This year the competition encourages everyone to discover their inner geek and embrace it, as geeks come in all varieties. The iiNet crew behind TopGeek has introduced multiple categories – including art, tech, fandom, gamer and internet – bigger and better challenges, TopGeek TV and runner-up prizes. I’m looking forward to TopGeek TV, a fortnightly series hosted by award-winning comedian and self-proclaimed geek, Lawrence Leung. The series will take a closer look at the nerdy stories behind the competition and the geeky finalists.

As a Fandom category judge, I’m looking forward to seeing the creative and geeky entries. I’ll be picking contestants to go through to the next round, show off their unique geeky talents, and compete in knockout challenges before battling it out during an epic final event on May 10th, 2012. The last geek standing will be crowned Australia’s ultimate TopGeek and winner. I’m looking for something that sets the contestants apart from the cookie-cutter-hipster-geek-is-cool-now type of geek – contributing to an open source project, running a meet-up or group, designing or developing a website from scratch, building your own robot butler, learning for fun not profit, amassing thousands of online followers, designing you own costumes, changing the world and thinking outside of the box. Pro tip: You don’t just watch/play/read/collect [insert whatever geeky interest here] you live and breathe it, you’re THE BIGGEST FAN and have amassed your own army of fans for your aforementioned fandom. Your profile should describe your geeky attributes and make me want to see more of you. Last years top twenty set the bar pretty high.

The search to find the Australia’s most talented geek is currently taking submissions. If you’re a geek (or you know a worthy geeky) head the the iiNet TopGeek 2.0 website. Good luck, geeks!

I’ve received an enormous amount of spam comments on my blog – over 740,000 spam comments have been caught thanks to Akismet – blog comment spam was a hot topic at the October Perth WordPress Meetup. I remember the days when blogs were spam free, roaming the internet without a care in the world, and you didn’t have to be concerned if a comment was real or spam. Over the last few years there has been an influx of what I like to call complimentary spam comments. To the untrained eye these comments seem to look and act like real comments, however, they are complimenting the author to try and secure comment moderation approval. The spam filled website link or fake email address is normally a dead giveaway.

A few months ago I received a spam comment that caught my eye, it’s the holy grail of spam comments…